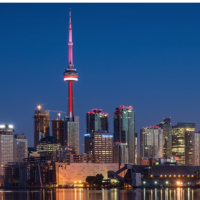 Maybe its not the right time to bid adieu to your condo after all. After having been bombarded with D-day forecasts about the imminent downfall of the condo market, the prices continue to reach unprecedented heights in the Greater Toronto Area, having risen up more than 9% in the last year. A study by real estate firm Royal Lepage released today, reports that in the last year alone, the median price per square foot of condos in the Greater Toronto Area soared up by 9.1% to reach $743. The surge is a product of both baby boomers who are downsizing and millennials who can’t afford a single-family home, rushing headlong towards the condo market. With affordability and demand fueling the need, condo prices are seeing an all-time high.

Many millennials have been unceremoniously chucked out from the race for single family homes due to the ever-soaring prices, whereas mortgage lending regulations have been tightened. Even those who were vying for a single-family home are settling on a smaller condo instead. One other factor behind the sudden increase in condo prices is their shrinking size. There’s an economy of scale with condos, which is why the price per square foot has gone up with the shrinking size.

The stringent mortgage regulations introduced at the start of 2018 are starting to mellow down, though slowly than expected. The regulations cooled the condo market off last year but come 2019, the new rules reign supreme. In an effort to bring some of the strongest real estate markets across the countries, including Vancouver and Toronto, in check, B20 entailed borrowers who pay a down payment of more than 20% to prove that they are capable of affording a mortgage at the Bank of Canada’s five-year benchmark rate or a rate two percentage points above what is being offered, whichever is higher.

On the other hand, condo prices have fallen quite a bit around the Vancouver region, dropping over 8.3 per cent to reach $764 per square foot. The drop is the most significant we have seen across the country so far. Akin to B20, a lot of city and provincial measures were introduced in tandem to keep the prices of both single-family dwellings and condos in check. It was a power battle of different levels of government doing things in Vancouver to cool off the market.

According to a spokesperson at Torontocondoteam, “Vancouver’s real estate market was reaching sky heights, the highest in fact in the country, it's no surprise that they still continue to fall in the wake of the stringent regulations. Vancouver had much farther to fall and they’ve been much harder hit.”