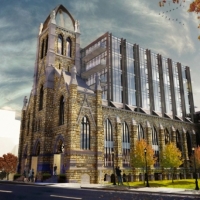 Yet another Toronto Church Being Transformed into a Condo Development

Could you live in a church in Toronto? Well, kind of. Swept up in the condo frenzy, the city has been taking historical churches and converting them into livable condo developments. If you were looking for something more than a cookie-cutter Toronto condo for sale, here’s something to get your attention.

Yet another church conversion has been planned in Toronto, according to a development application filed with the city on Wednesday.

Established in 1906, St. Monica's Roman Catholic Church is located in the increasingly condo-dense Yonge and Eglinton neighbourhood at 44 Broadway Avenue.

Heritage experts ERA Architects evaluated the existing church to determine whether its preservation would be a more prudent action. However, although the church building was originally constructed in a modified cruciform design around 1959, it has seen so many revamps and constructions that it is hardly construed of as having any heritage value.

This was before condo developers stepped in.

From what we have come to know, St. Monica's Parish has been looking to construct a new church since the end of 2017. After issuing a request for proposals, the firm Collecdev designed a plan that not only included a more modern church built atop the existing structure, but also a brand new residential tower connected to it.

According to a planning rationale document submitted to the city this week, “The redevelopment proposal has been conceived following a detailed consideration of the needs of the Archdiocese, which seeks to replace the existing place of worship on the subject site with a new modern facility.”

The new residential building is projected to soar up to 44 storeys high, accommodating 398 condo units: 41 three-bedrooms, 187 two-bedrooms, and 170 one-bedrooms. The two-storey underground parking garage is rumored to house 177 parking spaces, with around 60 reserved for St. Monica's parishioners. Also, for tower residents and members of the church alike, a new "front plaza area" is queued to be erected.

The four-storeyed church itself would directly connect to the tower. Architecturally speaking, it is poles apart from the modern-day church, but appears to be a dazzling edifice of a 25-metre tall steeple, gold framed gilded glass, and light stone.

Speaking of the church interiors, it would also include an architectural element typically found in early Byzantine and Christian churches and basilicas, known as narthex. The building will also flaunt a new parish hall and various conference rooms and office spaces.