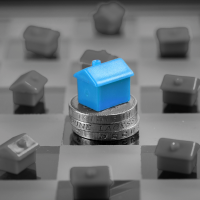 After the initial stages of the pandemic, there was a noticeable rebound in the market for detached, semi-detached, and townhomes in the Greater Toronto Area. However, the market for condominium apartments was a little bit slower to adjust, but it finally did so in 2021.

According to consumer polling, towards the end of 2020, first-time buyer activity was beginning to improve, especially in the City of Toronto. As a result, the condominium market saw an increase in listings and prices that persisted into the first quarter.

Sales are not at the record pace as last year, but they are still extremely robust historically. More significantly, there is still fierce rivalry among buyers on the pricing front.

The average selling price of a condo compared to February of last year, which was a similar rate of rise to that of single-family homes. The market for condominium apartments has changed, and seller's circumstances are once more prevalent. What about escalating interest rates, though? There has already been one increase, and more are anticipated.

Franco Dinatale  from the Toronto Condo Team With Right At Home Realty Brokerage has been selling condos in Toronto for 15+ years now. He says,

"Toronto is currently in an unpredictable market" "I would have expected Toronto’s Condo Market to have had a slow down period and price correcting over the pandemic period but we experienced the opposite effect." “The condo market was hitting new sold records with properties in every community experiencing multiple offer bids favouring an out of control sellers market” “The current market is showing such unpredictability with buyers sitting on the fence we have yet to see where prices will really go as rates continue to increase.” "In light of all of that we  still continue to see some really strong sales and also some really great deals" " This is a really great time to buy into the real estate market "

In Toronto, the average monthly salary increased by 20% over the past 12 months due to the pandemic's reopening, delayed housing construction, and an increase in mortgage rates that discouraged prospective homeowners.

on Thursday by the Toronto Regional Real Estate Board, the average monthly rent for newly leased one-bedroom homes increased to $2,269 in the second quarter, up 20% from $1,887 a year earlier. The 2021 amount represents a significant decrease from the second-quarter 2020 average of $2,082.

Two-bedroom rental rates now stand at $2,979, a 15% increase from this time last year. The double-digit price growth indicators reflect a decrease in listings, which is down 11% from a year ago.

In the upcoming months, it is possible to predict a further tightening of the rental market conditions.

Common rents increased by another 3.1% in June, the second-highest month-to-month increase in more than three and a half years, following a 5.7% month-over-month increase.

Common rents in the GTA are up 19% annually after two consecutive months of disproportionate hire growth of over 3% month-to-month, although they remain below peak levels from late 2019.

According to the research, the demand for rentals in downtown Toronto increased during the epidemic due to record immigration, an influx of international students, and many recent graduates moving for employment.

However, renters are facing a limited housing supply as the pace of house and apartment construction slows due to labour shortages and supply-chain interruptions that have an impact on the cost and availability of goods.

About 10,000 of the 30,000 apartment models that were supposed to be built this year have been cancelled or put on hold.

The pandemic caused a sharp increase in the number of homes listed last year as people moved from urban centres. With the resumption of in-person work, there is once again a desire for city living. Meanwhile, increasing mortgage rates will drive away many would-be homeowners and keep demand for rental models high.

While Toronto had significant growth, Mississauga experienced the largest average rent growth for condominium leases in the GTA, rising by 25% year over year to $2,820 per month in June.

Reaching $2,469, which is by 20% - the year-over-year second-highest common hire improvement was seen in Markham for apartment leases as of June. In Toronto, the average month-to-month rent for condos in June was $2,748, an increase of 19% from last year.

As of June, the rentals for four-bedroom, three-bedroom, two-bedroom, one-bedroom and studio apartments in the GTA have all increased over the previous year.

In June, rents in the GTA's high-end rental market reached their pre-pandemic high of

The posh rental market has been affected by the growth in borrowing costs, which has caused demand to shift to the rental market from the possession market, with the rent rising by 21% annually for the 90th percentile compared to 9% for the 10th percentile.

Although GTA rents will continue to climb shortly, the rate of increase will be slower than it was in the two previous months, which established records.

The market has been shocked by the swift increase in interest rates. It would compel people to noticeably look at house possession once more as sale costs for houses decrease and rentals fly up."

With these two options, some people might be inspired to reenter the market and purchase.

Due to a decline in preconstruction sales and an increase in financing rates, developers anticipate that the construction of 10,000 new condominium units will be delayed.

There is little, if any, room for new condo pricing to react to the environment as developers struggle with quickly growing construction costs, labour shortages, significant increases in development fees, high mortgage rates, and protracted approval procedures. Yes, it does.

Between the first and second quarters of 2022, new condo sales in the GTA decreased by 19 percent and 24 percent annually.

While it decreased 20 percent below the 10-year average and 6 percent annually, the number of new unsold condominiums in the market increased by 36 percent in the first quarter of 2022 from an 18-quarter low.

Additionally, there isn't enough pressure for new unit prices to decrease further because condo resale prices only decreased by 4.9 percent quarter over quarter, and there is still a low inventory level. Developers are instead postponing or scrapping their planned launches.

As presale buyers exercise caution and developers postpone new openings, which can lower the risk of currently continuing projects, the new condominium market is anticipated to continue at a modest pace from last year's record highs.

However, prices are anticipated to increase because of the low inventory and greater development expenses. As the market adjusts to the consequences of increased interest rates, stability in the rental market and a movement in demand towards more affordable ownership choices should boost condominium construction.

In the second quarter, there were 123,654 new condominiums in the GTA that were either in preconstruction sales or were being built. 905 more new condos are currently being built in the suburbs, following a spike in new condo construction during the previous three years.

In Q2 2022, the Greater Toronto Area (GTA) condominium apartment market displayed a similar pattern to the national housing market. The Q2 result, which included 5,687 sales, marked a fall of 35.2% from Q2 2021. The number of new listings over time was steady at 14,316. Active listings increased by 27.5% to 5,210 at the end of the quarter despite sales making up a smaller percentage of listings.

While some prospective first-time buyers have temporarily turned their attention to renting while they wait, the lower entry pricing of condominiums compared to freehold homes has given buyers another choice for easing the effects of increasing borrowing costs. Since the

In Q2 2022, the average selling price increased 12.2% year over year to $769,999. In the suburban areas surrounding Toronto, price growth over the previous year was more apparent.

In the second quarter, the condominium market's conditions improved, and buyers had a lot more options. However, the yearly average price increase rate continued to outpace inflation, especially in places outside of Toronto, where prices are competitive.

The population of the Greater Toronto Area (GTA) is continuing to increase, and the tight labour market will continue to fuel this rise. Policymakers must continue to intervene to increase housing supply to accommodate long-term population expansion, despite more balanced market conditions brought on by rising mortgage rates.

Home purchasers will eventually factor in rising borrowing costs because savings are substantial, and the jobless rate is still low. When they do, there has to be a sufficient pipeline of supply in place. Otherwise, the market will become more constrained.

Moreover, recent increases in interest rates by the Bank of Canada have started to control the "feisty" condo market in the GTA. The impact of the 2.25 percent increase is "reverberating" throughout the region's housing industry, with condo values falling sharply.

Prices in the GTA are at $832 per square foot, down 13% since March. At the peak in February, buyers paid an average of 15% more than the asking price; today, they typically pay 1% less. In recent months, inventory has also reached a plateau.

Overall, the area is seeing a slight buyer's market. Downtown Toronto, however, is witnessing a different scenario. As people head back to work, the supply has somewhat decreased in the city's centre while the average price per square foot has slightly climbed. In July, the average cost of a condo in downtown Toronto was $1,102 per square foot, or around $882,680.

As rent in the city soars, would-be sellers are re-listing their condos on the rental markets who cannot get the price which they ask for. This strategy may assist in explaining the recent rise in listings that have been cancelled.

The average monthly rent for a condo in Toronto is approximately $2,700, up 15% over the previous year. Renters often pay 1.5% more than the asking amount, and it has become customary to give a number of months' rent in advance to outbid the competitors. 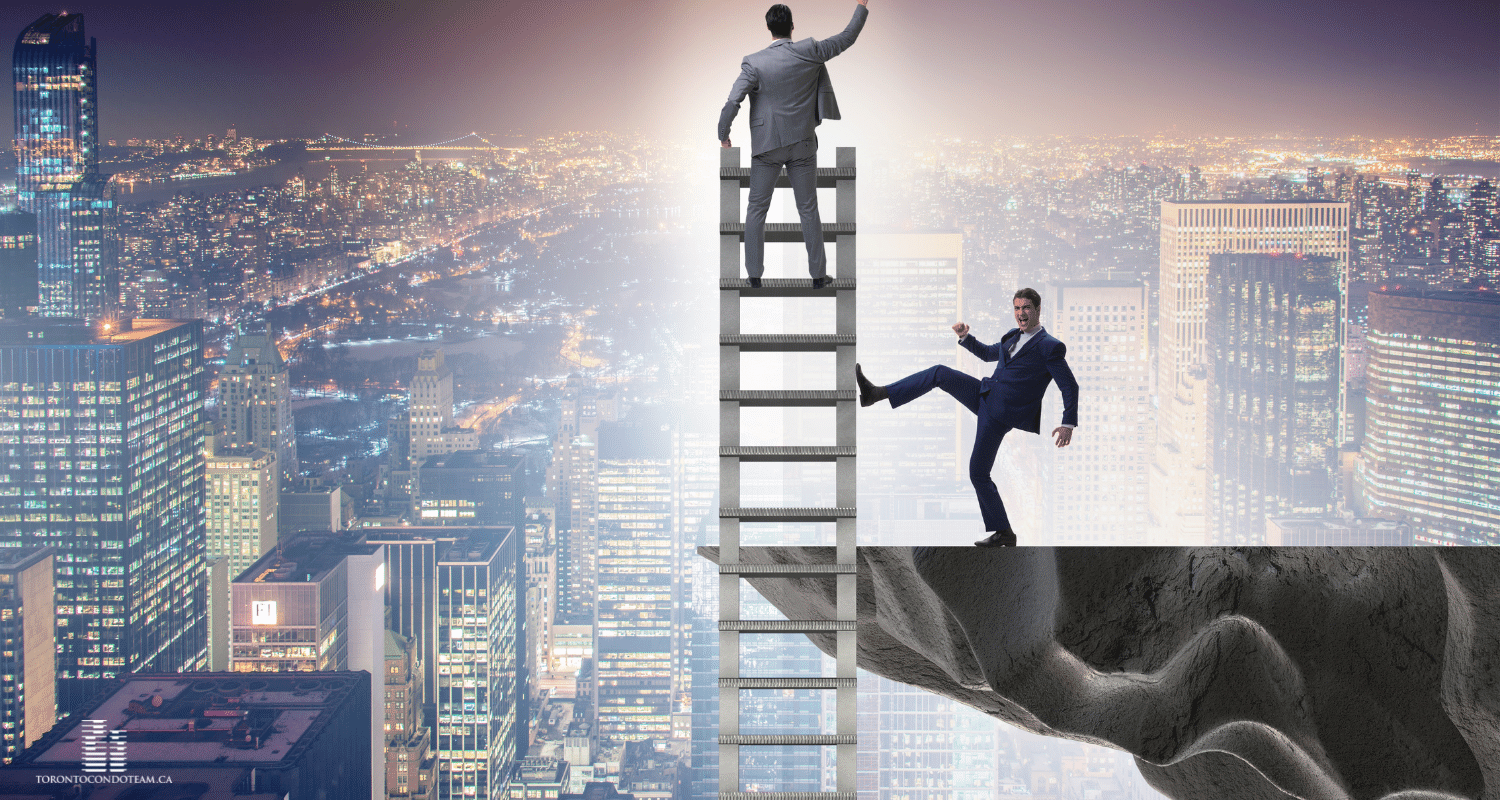 Rental competition is as strong as ever

According to a survey, there is a "historic" housing correction taking place nationwide, with more expensive markets like Ontario and British Columbia likely to be the "epicentre" of the slump due to rising interest rates, rising building costs, and a lack of labour.

The GTA's discontinued condo listings for June indicate that the market is already beginning to suffer. In Toronto, the number of cancelled listings has increased by 643% since January.

The preconstruction market is also experiencing the repercussions of the slump.

Some developers are postponing or cancelling their plans to launch entirely in order to deal with the downturn; according to them, this move will result in 10,000 presale units still needing to be built this year.

At the Toronto Condo Team, we know that buying a Toronto condo can be an overwhelming and daunting process. That's why our condo real-estate agents aim to provide friendly advice and guidance throughout this whole experience. We are located in the heart of Toronto, and therefore we have access to an exclusive range of Toronto condos for sale.