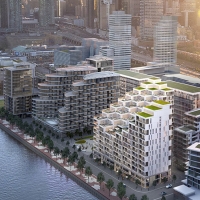 The Growth Of Waterfront

Toronto is famously known as a global business and finance hub. It is also the largest city in Canada. Moreover, Toronto is also one of the friendliest and most diverse cities in the world. With a motto like, ‘Diversity: Our Strength,' it is no surprise that Toronto is home to numerous cultures living together in harmony. It is a city located on the shores of the great Lake Ontario. Lake Ontario is one of the five great lakes of North America. It provides the city of Toronto with drinking water and a wide array of recreational activities. Apart from this, the lake also provides Ontario with electricity along with many other economic benefits.

This strategic location of Toronto has made it a critical residential nucleus over the past few decades. The Toronto waterfront is located right on the shores of the great Lake Ontario, in the City of Toronto, Ontario. It stretches over an area of approximately 46 kilometers (28.5 miles), between the mouth of Etobicoke Creek in the West, and the Rouge River in the East. The Waterfront is the heart of many social and economic activities in the city. It is also a popular tourist destination for travelers coming from far off places to admire its beauty.

Since the success of the 1972 ‘Harbourfront Project,' the lakeshore of Toronto has become an attractive residential area. With scenic views of the lake and the fast-growing healthy lifestyle trends, this region is gaining popularity by the second. In a residential population profile by the Canadian urban institute, it was observed that over 97 percent of households live in condominiums in Waterfront West and Waterfront Central. Fifty percent of the population lives alone, and 25 percent are couples without children.

However, this neighborhood observed the third-highest number of newborns between 2011 and 2014. This area was also ranked second when it came to the number of people who moved to Waterfront Toronto in the last year or last five years. It is highly likely that this was due to the increasing number of condo projects introduced in this region. This was mainly over the previous ten years under the Waterfront Revitalization Project.

The Waterfront Toronto is divided into five significant neighborhoods under the Waterfront Revitalization Project. Each region has its perks. Apart from being located on the lakeshores of Lake Ontario, another common factor for these neighborhoods is the multiplying numbers of condos being built here.

As per the Waterfront Toronto's master plan, the region upon completion will include around 40,000 new residences. Out these, about 20 percent will be affordable housing solutions. There will also be 40,000 new jobs, 300 hectares (740 acres) of green and public spaces. Moreover, the plans also include a new public transportation infrastructure. They have gained popularity among residents over the years. Time and again, they have proven to be economical, practical, and comfortable to their inhabitants in various ways.

This region is commonly known for successfully harboring businesses. The Waterfront Revitalization Project plans on giving it a more suburban touch. Queens Quay has been turned to a Waterfront Boulevard with tree-lined promenades and cycling connections. The entire Waterfront is connected with the help of trees. Materials like granite have been used for the paving of surfaces, cedar, and ripe wood has been used for the decking and the benches.

Installation of brushed railings of stainless steel and aluminum and timber light poles have been lodged. Finger piers are also installed to encourage marine activity and to make this region more people’s place. A few popular condo buildings in this area may include Pier 27 located at 29&30 Queens Quay and Quay at 90 Stadium RD. These condo projects come under the Waterfront Revitalization Project. They aim at providing individuals with comfortable homes in one of Toronto’s fasting growing residential hub, the Waterfront. Many of the condo complexes also include affordable housing.

East Bayfront is one of the newer neighborhoods being developed on the Waterfront. It is located directly on Lake Ontario and lies very close to downtown Toronto. This makes it a very significant Waterfront community. According to the Waterfront Revitalization Project, the East Bay Front will feature around 6,000 residential units, along with affordable residences which will be about 1200 in number. There will also be employment spaces of millions of square feet of area which will be able to provide 8,000 jobs.

There will be plenty of retail, entertainment, and cultural facilities around the region, and public transportation will provide easy access to the location. Monde, located at 12 Bonny Castle road, is a development by Great Gulf. One of the most renowned architects of the city, Moshe Safdie, handled the Monde project. It is a mixed-use development that is the city’s very first development in the private sector in this neighborhood.

Lakeside Condos located at 215 Lakeshore Boulevard East and Aquavista condos at 21 Queens Quay east are other popular condominium developments in the neighborhood.

The Waterfront Revitalization project has taken this rare opportunity to convert part of the heart of the downtown area that is majorly underused. The Port Lands have always sustained new communities and has played a significant role in the growth of economies.

Spread over an area of 715 acres, The Port Lands is a neighborhood along with the Waterfront. A few landmarks along this neighborhood include Cherry Beach, Tommy Thompson Park (a famous bird-watching spot in the city) and the Hearn Generating Station, a decommissioned electrical plant.

The Waterfront Revitalization program focuses on redefining and reconstructing all the neighborhoods in Waterfront Toronto. Moreover, this project has been active in regions ranging from Etobicoke at Mimico and in Scarborough at Port Union. Waterfront Toronto has partnered with the Toronto Transit Commission to fund the construction of a second subway platform at Union Station. This will provide additional passenger capacity and will help connect transit users to the wider Waterfront.

Other plans include building and transforming the land which is under the elevated section of Gardiner Expressway, from just west of Strachan Avenue to Spadina Avenue, into multiple public spaces. The Waterfront Revitalization project has also partnered with the City of Toronto and the Toronto Transit Commission (TTC) to devise plans for a comprehensive transit network across the more extensive Waterfront. These changes will ease the hassle of traveling between the neighborhoods and create sustainable residential sectors in the region. A few residential condos popular among people in this region are Aquabella Condos located at 118 Merchants Warf and Lighthouse Condos located on 20 Richardson St.

This neighborhood is one of the most prestigious residential areas in the Waterfront community. Now, it is focused on being family-friendly and accommodating to all other types of residences. The Waterfront Revitalization project has insured bringing back the sense of community in this area. Multiple residential complexes have been built since the beginning of the project.

According to the Canadian urban institute, this region has doubled its population of residents over the last five years due to the emergence of such condo building projects.  One of the first private sector development of the community is River City, and the development is setting the new and high benchmark when it comes to sustainable urban design in Toronto. Moreover, the first and second phases have already been occupied. The launch of Phase 3 and Phase 4 is in the works, but officials are sure the launch will only attract more residents. Since it is a residential community, parks such as the Underpass Park and the Corktown Common have been developed for recreational purposes of the locals.

A transforming region in the city

The development of condo projects has played a vital role in the Waterfront Revitalization project. Moreover, complexes such as Atrium at 650 Queens Quay, Kings Landing at 460 Queens Quay, Harbourside at 55 & 65 Harbour Square have provided people with their perfect homes in this neighborhood. The Waterfront Revitalization project has changed the way the lakeshore was perceived. It has become a residential hub from an industrial center.

Hence, the Waterfront has proven to be an exceptional area to raise a family because of its safe and family-friendly environment. The development of parks and recreational centers has only added to the comfort of its residents. The natural appeal of the lakeshore is its divine nature and its extraordinary weather. It was difficult for people to fully enjoy these pleasures due to the lack of proper housing facilities. The development of condo buildings in the Waterfront has attracted the masses. It has now become a sacred haven for its inhabitants which provides them with the perfect balance of comfort and outdoor pursuits.