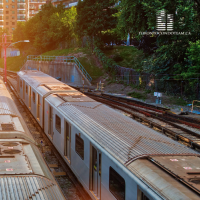 The YNSE (Yonge North Subway Extension) will head north from Ontario's Finch Station to Markham, Vaughan, and Richmond Hill. With an increased focus on fewer vehicles, more walkable urban centers, and more walkers and cyclists, one aspect of successful city planning is the ability to effortlessly 'move people.’ And this smartly designed public transportation plan can be a great example for recognized growth zones and rising employment hubs.

York Region is Canada's growing major municipality and one of Toronto's largest commercial regions, with more than 1.2 million citizens, 52,000 organisations, and above 636,000 jobs. It is expected to rise by 1.8 million people and 900,000 jobs by 2041. These budding sections of the York Region demand an extension to the subway for maintaining economic development and combating greenhouse gas emissions.

The YNSE is a 7.4-kilometre (4.97-mile) stretch of the Toronto Transit Commission's Line 1 (Yonge University) covering up to the four stations. Once this projected Ontario Line is ready, this expansion will be active, making people move easily and quickly while reducing road congestion and pollution. Metrolinx and Infrastructure Ontario have collaborated with municipal and regional allies to accelerate and improve the Yonge North Subway Extension.

What is the Scope of YNSE?

The following are the features of YNSE:

Metrolinx believes that the expansion would improve links to employment and homes, removing thousands of cars from the roads, and increasing transit access for more residents. In addition, it will have a daily boarding of 94,100 commuters.

How is this Investment Beneficial?

The benefits of investing in the YNSE are apparent.

The YNSE will establish seamless connections with local transportation systems, allowing more railway commuters to finish their trips without transferring. The proposed extension will provide access to the Richmond Hill GO rail and Highway 407 GO bus and local bus lines at each station. Prospective developments in the Richmond Hill Centre region would benefit from a stop on High Tech Road.

Travellers will access the train faster and more conveniently if Bridge and High Tech platforms are located on the top, as they would not have to use the deep underground tracks. Going from a bus, GO rail, or any other surface-level transport will be simpler at these terminals.

By 2041, over half of the population planned to stay in the Richmond Hill Centre region will be within walking distance of High Tech Station. This will be a great initiative to decrease traffic jams.

The Yonge North Subway Extension will allow spending less time travelling. Thus, the residents can spend more time with their families. The expansion, for instance, will cut the time it needs to get from Langstaff Road and Yonge Street to downtown Toronto by up to 22 minutes. Furthermore, drivers will cut the overall area covered by vehicles during the morning commute by 7,700 kilometres. They can take the metro instead of their private vehicles.

Eliminating the Complexities to Travel

Operating the expansion at ground level along the current CN railway line eliminates the need for complicated tunnel station development. Moreover, it nullifies the extra time consumption as it utilizes the existing rail track. It will assure that developers can complete the project swiftly. They can avoid massive, noisy construction sites for underpasses and departure buildings. This helps Metrolinx to keep property requirements for the surface-level segment to a minimum. Keeping as much activity out of place as possible would also help minimize disruptions to utilities. These include electricity, natural gas, and groundwater in the surrounding neighbourhoods.

The cost of developing the three-stop variant of the rail project is now expected to be between 4.3 billion dollars and 5.1 billion dollars. Besides, each subsequent station would cost around $500 million. Further, they are planning to research the location of a fourth station. However, further research of the new alignment suggests it will be close to Royal Orchard. The original 7.4-kilometre extension was estimated to cost 5.6 billion dollars in total. Developers proposed two more tunnelling possibilities with three stops each and nearer to the initial route in the strategic plan. They estimated the costs of these choices as between 4.5 billion dollars and 5.8 billion dollars.

What Effect Can Subway Lines Have on Property Values?

Experienced Toronto Condo investors are hunting for chances along these transport lines. It is because they know that properties near transportation lines in Toronto appreciate eventually. For example, house owners in the Eglinton Crosstown LRT's immediate area may soon discover that this transport line will add more value to existing properties. Close to the LRT's middle terminal, nearest to Mount Pleasant and Eglinton stations, have witnessed a 63 percent increase in value during the last five years.