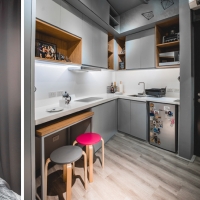 Micro-condo living: This Minuscule Toronto Condo Is $2,000/Month and It Doesn’t Even Have an Oven

It seems as if every new year is seeing Toronto Condos shrink ever further. As one of the most expensive cities of Canada, Toronto will inevitably become inaccessible to the common person. With little in the way of amenities and prohibitive prices, condos are fast becoming Airbnb ghost hotels owned by the wealthy.

Let's hear it from downtown Toronto: This condo development on 576 Front St. West  features units that are smaller than 480 square feet and even lack an oven. Each of these 162 units can go up to $2,100 a month! Now that's something hard to get your head around.

Minto Westside is a brand-new condo development very inaptly touted as the stunning new landmark of the city according to the official project website. The condo building has two towers, a 20 story one and one 18, in an architectural style in line with the overall aesthetics of other heritage buildings in the vicinity. While quite handsome at a glance, the condo units are pretty small; and by small, we mean tiny, reminiscent of a doll house. Currently, the biggest condo on offer is only as big as 861 square feet, with the smallest going as low as 480 square feet and lack an oven.

According to a report by the Toronto Star, one of the rising trends witnessed in the condo landscape is the lack of a standalone oven. Some experts blame the proliferation of app delivery services such as SkipTheDishes and Uber Eats, as the culprits behind why people are suddenly attracted to Toronto condos without ovens. Afterall, as Carrie Bradshaw of Sex and the City says, “people use their ovens as closets.”

Not to mention, it has been observed that most people residing in the downtown don't cook. A commentator from Ryerson University has estimated that builders save millions on not installing cooking appliances. They further testified that investors would be attracted to these living spaces for Airbnb purposes. Afterall, Toronto doesn't rule against short-term rentals so such ventures would be quite lucrative. For the most part, the building and the units look quite decent. It's clear that the project took aesthetics in high measure. However, the tiny kitchen is an eye sore.

We can only hope against hope that this trend toward ovenless condo isn't here to stay though. Always ordering delivery isn't sustainable to the long-term well-being of your environment, wallet, or your health. Food for thought though; with condos like these being marketed at exorbitant prices, it's no wonder people are worried about the future of our cities. On the plus side, if you were looking for Toronto lofts for sale under 400k, perhaps you could look into this option – san the oven!