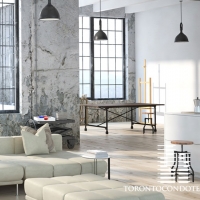 Living the ‘LOFTY’ Life; whether to go for Soft or Hard Lofts?

Without a doubt, loft living in Toronto has its charm today, so much more than when the concept took root in the City of Toronto in the mid-1980s.

Initially the very first Toronto loft spaces were crafted by converting existing factory buildings into workplaces or residential areas. The idea marks the adaptive reuse of a structure – one built of poured concrete or wood beam timbers and wood, construed to last eons for industrial or commercial production. Touting spacious facilities with large factory windows and soaring ceilings, sweeping volumes rendered an element of loftiness to the units, allowing for ample air and light to flow in. What started in Paris and New York, soon reached Toronto, with the transformation of a couple of small factory buildings in residential neighborhoods in the heart of the city. Such ‘hard loft’ buildings are hard to come by these days, since there are only about 50 converted buildings in Toronto, accommodating anywhere from a few dozen to several hundred units.

With the ever-escalating demand for innovative spaces, developers in 1990’s emulated the idea and started constructing what they called the condominium 'lofts'. Incorporating large windows and lofty ceilings to varying degrees of success, developers keenly adopted the loft aesthetic, resulting in the proliferation of several numerous 'soft loft' condominiums. While these newly constructed buildings lacked the vintage makings of the original loft conversions, they offer a new take on modern living to those who aspire to a clean-lined minimalist aesthetic. Let’s delve in details on what both the types signify:

The hard loft is in essence the authentic, original loft, constructed by transforming an industrial or commercial space. Aside from mighty high ceilings, one key definer is the usage of specific building materials that gives an industrial 'grit' look to the space. Elements such as original hardwood flooring, wooden posts and beams, and exposed ductwork are tell-tale features. In addition, how the hard loft’s design elements and layout come together to augment the overall sense of space, is another identifier. We have always associated the breadth of a space with its spaciousness, but here, height comes to play. Opening space to the potential of air and light and drawing the eye up, exudes a pleasant illusion that boosts livability and comfort.

However, these Toronto lofts have their drawbacks as well. First, these old buildings are not high on energy efficiency; a dilemma further compounded by such lofty ceilings. Think of all the extra space that has to be cooled or heated, not to mention, for two storied lofts, comfort and air circulation can be inconsistent. Sound separation also becomes a challenge in these Toronto lofts, since the wood and brick structures are peppered with gaps that enable noise transmission.

In addition, hard lofts lack outdoor living spaces, such as a garden or a balcony. Since they are basically factories turned residences, they can either be in the very heart of the downtown core or located in not too pleasant locations. I would like to mention here that the city’s own cycle of gentrification has witnessed the transition of areas such as the Liberty Village and The Fashion District from ‘edge’ to ‘chic’ in a blink of an eye.

In addition to their unique qualities, hard lofts have always been in high demand, partly due to their undeniable aesthetic appeal and 'grit', and in parts because of the simple fact that they are in short supply.

While a soft loft embraces most of the same design aesthetics of a hard loft, such as expansive floor-to-ceiling windows, decidedly urban finishes like exposed concrete walls and floors, open floor plans, and extremely high ceilings, they are new condominium constructs, nevertheless. While they may show you design elements such as ductwork and exposed brickwork, they are not original by-products of function; these are just features artificially contrived to imitate the hard loft aesthetics that people are looking for. As they say, imitation is the sincerest form of flattery!

Looking at soft lofts from a design perspective, these Toronto lofts are designed to mimic a plethora of the favorable qualities of their predecessor. However, try as hard as they may, by virtue of their intended purpose at the time of construction or their young age, they lack the ambience and character offered by the unique design elements of the hard loft, in addition to their authenticity and history. That said, soft lofts are indubitably spacious, and are a best fit for those looking for a pared down, minimalist look.

Soft lofts are also in high demand in Toronto since they offer a wide array of favorable amenities in the building, something that hard lofts lack in. After all, soft lofts offer the best of both worlds; onsite amenities that boost the quality of life through convenience coupled with the rustic loft space. For instance, its not hard to come by soft lofts with state-of-the-art fitness facilities, deeded lockers, or underground parking.

The construction of soft lofts also allows for second-storied mezzanines, with the main floor occupied by common living spaces, and bedrooms located on the second floor. This makes better use of the two-storey vaulted ceilings in the existing space. Developers also frequently offer private outdoor spaces as part of their construction program, so you're more likely to see a soft loft with a terrace or a balcony.