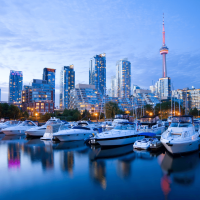 The city of Toronto is home to one of the longest urban lakefronts in the world. This 46-kilometre shoreline sits between the mouth of Etobicoke Creek in the west and the Rouge River in the east and is home to some of the city's most popular attractions. Apart from city parks, beaches, venues, galleries and world-class restaurants and bars, you can also find luxury Toronto waterfront condos and lofts with breathtaking views of Lake Ontario. What was once an industrial hub has quickly turned into one of the city's more desirable locations for luxury condo living.

Today, Toronto's waterfront community encompasses 2,000 acres of urban redevelopment projects. Condominiums, both high and mid-rise, provide a direct view of the mesmerizing Lake Ontario, with new development projects constantly in the works. With the influx of residents, Toronto's Waterfront neighbourhood has grown in size and culture to include a wide range of events, cultural centres, shopping, eateries and public spaces, making it the perfect place for condo residents to live and play.

Toronto is a world-renowned city known for its cultural diversity and advances in technology, finance, entertainment and education. Located on Lake Ontario's northern shore, the Waterfront has always been a site to withhold among the locals and the tourists. With various attractions, professional hubs and premier entertainment, this neighbourhood keeps you within walking distance of the city's best.

Etobicoke Creek forms the border on the west side of Toronto, with neighbourhoods such as Mimico, Long Branch and New Toronto located on the northern side of the Lake. The Rouge River forms the eastern border of Toronto's Waterfront, acting as the border between the east suburb of Pickering and Toronto.

Today, Downtown Toronto's Waterfront has become a prime residential location. To the east of Exhibition Place begins a long stretch of former commercial and industrial areas that have been converted into some of Toronto's most luxurious residences. This neighbourhood within Toronto's Waterfront is often referred to as Harbourfront.

During the 1850s, Toronto's Waterfront looked very different than what it does today. The city's shoreline existed north of today's Rail Corridor, with its edge outlined by Front Street. However, a landfilling campaign executed in the 1850s was carried out on a massive level to expand the southern shoreline and continued for the next 100 years. Toronto's current Waterfront shoreline is a result of the landfilling campaign.

The shoreline at Toronto is approximately 46 kilometres, formed by Lake Ontario. The French built Fort Rouillé along the Waterfront in 1750, and the Town of York was established in 1793 on present-day Front Street. The shoreline extension campaign allowed Toronto's harbour to grow more prosperous, creating an increased number of business opportunities. However, this area fluxed with commercial, industrial, railway and shipping experiencing significant decline until the 1970s. This led to another movement, the urban redevelopment of the site, now known as Toronto's Harbourfront. This urban development has led to great results, with the neighbourhood center in the flourishing city of Toronto.

Major Toronto tourist attractions such as The CN Tower and Rogers Centre and various luxury Waterfront Condos Toronto result from the redevelopment plan in action.

Along Toronto's Waterfront, there are several famous landmarks,

There are several notable attractions close to Toronto's Waterfront:

Other Popular Attractions in the Greater Toronto Area

Toronto's Waterfront is home to various luxury high-rise and mid- condos and lofts, forming one of the city's most popular residential hubs. Residents of waterfront condos in Toronto have access to shopping, eateries, and cultural centres. They are steps away from the city's heart at all times, making for the perfect combination of serene lakeside living and the hustle and bustle of the city.

The Quay West Condos are located at 90 Stadium Rd, combining both serene lakeside living and busy city life. Built- n 2011, it is one of the most recently built modern waterfront condos in Toronto. Located at the ultimate centre of every necessity, the Quay West condos offer mesmerizing views from the lakeside patios and proximity to shopping, dining and entertainment.

10 Yonge St, Toronto, is the location of World Trade Centre Condos. The building comes with 36 stories and 407 residential units. Due to its place on Toronto's Waterfront, its location is desired by many potential condo owners and renters, especially young professionals working in the city. These intelligently designed contemporary Toronto Waterfront condos developed by Camrost - Felcorp range from 525 square feet to as large as 2795 square feet.

When living at World Trade Centre Condos on Toronto's Waterfront, you have every necessity within walking distance. Outside your front door, you can access various tours and cruises by boat, Sunnyside Bike Park, world-class dining, education and business hubs and the entertainment district. Likewise, a well-known amenity of this Toronto Waterfront condo is access to 30,000 square feet of recreation and relaxation facilities. These include indoor and outdoor pools, a driving range, a children's playroom and a luxurious party room on the 38th floor.

Aquavista Condos at 1 Edgewater Drive are one-of-a-kind, luxurious, and one of the most recent Toronto Waterfront Condominiums. Designed by recognized Architect, Architectonic, it has become a highly-desired residence on Toronto's Waterfront. Standing at 14 stories, it boasts 350 units ranging from 500 to 3000 square feet.

Located at 12 & 16 Bonnycastle Street is the Magnificent Monde Condos. It stands out amongst other Toronto Waterfront condos because of Moshe Safedie's unique and intelligent design. The 46-storey building has its design beautifully made in collaboration with Toronto Quadrangle architects. The suites have various area ranges, with the smallest being 483 square feet to the largest at 1,677 square feet. The building design of an extended balcony on every second floor provides a unique exterior recognizable in all areas of Toronto. The show's topper for amenities is a recreational space of about 1900 square feet designed by Cecconi Simone, a well-known interior designer in Toronto. Other amenities are an indoor garden, outdoor pool, Yoga and fitness studios, and various others. Alongside Lake Ontario's lakeshore, the majestic view becomes the icing on the cake.

This Toronto Waterfront Condo has a 500 units capacity. It surrounds itself with places that pique interest; the Waterfront Asia Market, Hockey Hall of Fame, lakeside patios, Sunnyside Bike Park, and many others. Moreover, the best part is being just the right distance from the city.

Competing neck to neck with other Toronto Waterfront Condos is the Aqua Condos located at 410 Queens Quay West. Developed by The Monarch Group, the 16-story condo building has 273 units with unmatched views of the city and Lake Ontario.

The luxurious amenities provided to the residents are one of the many reasons Aqua Condos stands as the best. The rooftop BBQ area is the main attraction among amenities. However, other popular amenities include outdoor patios, underground parking, a sauna, a world-class fitness centre, a Whirlpool room, Security and Concierge (24x7), and more.

Located in the 1929 Art Deco Building designed by Max Dunning is the Tip Top Lofts. Located at 637 Lake Shore Blvd West, the uniquely attractive urban blend in the location makes it an ideal choice for Toronto residents. These lofts are no less modern than the latest built condos in Toronto. With 255 unique available, ranging from 394 square feet to 3771 square feet, Tip Top Lofts are sure to be the perfect home for young professionals, families and retired individuals. The buildings surrounding the Loft are The Yards at Fort York, York Harbour Club, and Quay West.

Toronto's best eateries near Waterfront are:

Miku Restaurant has a wide variety of Traditional Japanese courses served for you. The menu at Miku curates a mouth-watering blend of Culinary techniques from the modern west coast and multi-course dining from traditional Japanese culture. The nuances throughout the flavours are one to savour. Also, the farm-fresh and finest ingredients are the icing on the cake.

The El Catrin restaurant serves Mexican Cuisine with hints of modern and traditional authenticity. The menu is tapas style, wide-ranged, and ambitious, allowing diners to experience the wide cuisines around Mexico through the menu easily. You can experiment with both textures and flavours. They serve some of the best margaritas around the city!

Things To Do On Toronto's Waterfront

The experienced brokers in real estate give top-notch services and reduce the gap between the people looking for homes and their ideal condo. The Toronto Condo Team can assist you in discovering the best Toronto Waterfront Condos for renting or buying. Irrespective of whether you are looking to get your first condo or trying to gain more knowledge about living in condos, the dedicated professionals at the Toronto Condo Team will be with you on every step of the journey