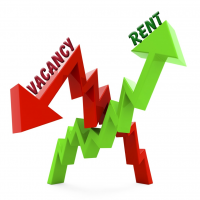 High Is Rise As Rents Elevate In The GTA

Prices of property in Canada are alarmingly high. With more people shifting to the country every day, the overall density is increasing. The demand of land and property is booming as well. However, some areas are more affected than the others. There are many different reasons behind the high rise in the buying and rental prices of these areas. One of the areas with most elevated rental prices is Greater Toronto Area (GTA). Greater Toronto Area is Canada’s most populated metropolis area. Hence, it is the most in demand area as well. GTA is also known as Toronto’s Central City. Due to a greater number of people moving to the area, the prices of property, especially rents, are soaring high.

There is an increase in the demand of rent in Greater Toronto Area (GTA) and it is believed to be the highest rise in cost in Toronto’s history. The estimated cost for a condo to be rented in the Greater Condo Area is now likely to have a rise as high as 6.8 % year after year and now the cost has become $2.53 per square foot, based on the report of Urbanation’s first quarter in 2016. It has happened after a very long time that prices of rentals have increased with an exponential rate. But this estimation is based on the comparison with the report of Urbanation’s fourth quarter in 2015 which presented a 4.2 % year after year increment.

The Quarter one presents a 25% year after year to 6,163 units with an increase in the amount of condos rented in the metropolis area of GTA through the Multi Listing Service (MLS) System. This increase in rented condominium apartments has been attributed to the growth in population, causing an increased rate in condo occupancies. This has driven the people into choosing a better living solution that is not hard on their pockets. The occupancy, as recorded in the year, increased by 19 % to 27,155 units which is considered to be record breaker.

The year 2015 brought with it a 25 % growth in construction of these units making the rate as high as 3,476 units. Since new things become part of trend, more support was provided for the development of new projects for rent in the Q1 of 2016. The original increase in construction rate thus received a further boost with an additional 4,284 units concatenated with the suggested supply of total 14,753 units making an estimate of 42 of the projects being developed in GTA. The older projects that had been developed since 2005 were thus receiving more occupancy because of the trend, and the percent increase on 7,309 units were on average 0.5.

Shaun Hildebrand, the senior vice president at Urbanation attributed the increase in occupancy to the better standard of living granted because of economic strength that lead to the demand of these condos. But with the increase in demand the prices were also raised, making it difficult to avail the property. Hence, a lot of people who initially planned of shifting to Greater Toronto Area are now off to change in plans. Due to a high increase demand of rents, a lot of newly moved Canadians are moving to outer and relatively colder regions of the country. The development of new project has not helped in lowering the cost because of increased demand, rather with increased demand the development of these condo projects have also increased. Due to the increase in overall property rates of the area, the cost of maintenance has also risen up.

The increase in leasing of the condos increased not so dramatically in the first quarter with predictability of growth from previous experience in fourth quarter that had passed. The first quarter indicates a positive relation between the rate of leasing of condos and the rate of rent increase. But even with the increase in rent, these condos are going out for rent even more quickly. And on average, the increment in rental price has reached $3000 per month. There has been a surging increase in prices for old as well as new projects in market but comparatively, older projects have lower cost.

With already many projects already done in the market, the construction and rental of these projects are in high demand and are increasing day by day. This, on one hand, is making it difficult for new people to move the area. However, the current property owners, especially condo owners, have a record profit. The index rate of newly build projects in Greater Toronto Area is ranging from $ 2.37 to 3.90. This is record breaking up rise indexed after a very long time. The newly build projects have a higher range of rental rates as compared to the older ones.