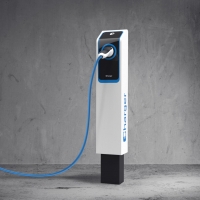 Electric vehicles are a relatively new innovation in the world of technology, a step towards green future. While there are a lot of environmental benefits from the electric vehicles, it is still not used commonly because it is expensive and unreliable as of yet.

Right now, there are two kinds of electric vehicles in the market, one would be fully electric (BEV) and another would be a hybrid between electric and gasoline (PHEV). The battery range for these cars start from 15 kWh and goes up to 100 kWh. The smallest battery has a range of 120 km after a full charge whereas the biggest battery can take you as far as 500 km after a full charge. While the hybrid cars contain a small battery of 15 to 20 kWh along with a gas tank as a backup whereas the fully electric cars can contain either big or small battering, depending on what size they are. Even though the acquiring prices for this coming of age technology is very expensive, the operating cost is just as low. A gas-fueled vehicle can make you spend up to $ 300 to 500 on maintenance whereas the electric vehicle can get the maintenance done in about $ 30 to 50.

Even though the popularity of the electric vehicles is slow to spread, it is spreading, and more and more people prefer electric vehicle instead of the same old gas-fueled vehicle. Since the charging of the car takes up almost half an hour, people would mostly support the idea of having the car chargers as close to home as possible. People living in condos in Toronto have also started calling out to the authorities to add the charging stations in the parking areas of the buildings. However, the Condominium Act stands firmly against the idea because the installation of the charging station is expensive, even more so for the older buildings as compared to the installation process in the newer buildings. There are 3 kinds of issues that can be risen by the condo buildings and they are

However, it will all be for naught if the Condominium Act is not amended and remains a barrier towards green future.