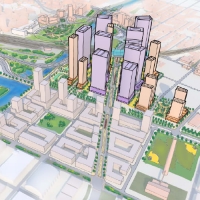 The area on the eastern side of Toronto's waterfront has been left untouched for years. But, that is about to change, thanks to the city's efforts in collaboration with famous real estate developers. East Harbour Downtown is one of the most interesting new initiatives. It brings the volume of employment, transit, and retail. Moreover, to the east of the downtown core, it looks forward to playing a key part in changing the city's lakefront. Thus, it would be one of the top-notch communities in Toronto.

What Does East Harbour Include?

East Harbour is a 60-acre project that is still in the design phase. The project shall be structured in conjunction with Canadian developers Cadillac Fairview and Danish urban planning company Gehl.

A Blend of Social and Business Lives

It adds 10 million square feet of new commercial, retail, cultural, and public space to Toronto's urban fabric. Large office skyscrapers rise over public squares and sheltered promenades. As a result, East Harbour aims to strike a balance between business and social life in the public realm. This is all while taking into account the Canadian climate.

With a large population living within a one-kilometer surrounding East Harbour, the site has a lot of potential as a local pedestrian hub.

It's simple to see why East Harbour is a suitable choice for a regional transportation hub. For instance, it lies at the intersection of multiple crossing transit networks. In addition, East Harbour is located east of the Don River's mouth near Eastern Avenue and Broadview Avenue. Thus, it is the potential meeting place of five transit lines, four of which are already operational.

The future East Harbour transit hub shall include Stouffville and Lakeshore East GO Train lines. Furthermore, it will also encompass the Broadview and Queen streetcars (the former of which will be extended). Also, it involves the projected Ontario/downtown relief subway line.

The East Harbour plans to become Toronto's second-largest transit terminal. It expects to relieve the load on Union Station by offering an alternative route into and out of downtown Toronto. Furthermore, because of its location at the intersection of the Lakeshore Boulevard, Gardiner Expressway, and Don Valley Parkway, local drivers will have access to a variety of highways.

You can easily distinguish East Harbour with its easy accessibility to existing transportation infrastructure from the closely packed urbanization. Indeed, it has transformed much of downtown Toronto's industrial sites into densely populated residential areas. Local people have the unique luxury of having direct access to several transit alternatives. Thanks to the integration of land use and transportation planning and engineering. All these transportation developments would be put to the test once East Harbour Downtown is successfully constructed.

General Motors has begun construction on a new mobility campus and innovation center across the street from East Harbour. It will eventually employ tens of thousands of people. The 721 Eastern Avenue site will provide 14,000 square feet of space to the creative industry. As a result, it will assist stimulate innovation, in addition to research facilities and office space.

Moreover, during a May conference, Kevric Real Estate revealed that the company aims to construct office space at an East Harbour-area site along Eastern and Lake Shore Boulevard. We can safely assume that this new neighborhood would be home to numerous opportunities.

This bold proposal to create tens of thousands of jobs in Toronto has not gone overlooked by city officials. Mayor John Tory states that East Harbour stands as a crucial piece of land. It can offer many new jobs, making it a potential economic value to the city. After giving individuals a reason to visit, East Harbour's economic engine will also provide them with a reason to stay.

An Extension to the Neighbouring Community

East Harbour will include a heavy emphasis on pedestrian routes and social commons, making it a social extension of the active neighbouring community, according to architectural firm Henning Larsen from Scandinavia and urban planning firm Gehl from Denmark. Visitors to East Harbour will like to stay longer and enjoy the many benefits of this lively community, something that local inhabitants can do permanently, thanks to this new civic commons!

Within a one-kilometer radius of East Harbour, 100,000 people anticipate to live after its completion. As packed as that may sound, this neighbourhood intends to offer a welcoming environment where residents can live and work without having to commute, all while enjoying a high-quality urban lifestyle with various local facilities.

In terms of lifestyles, this area will be open to some of the city's most popular trends. East Harbour Downtown is remarkably close to several unique retailers and services, including artisan espresso cafes, theme bars, vegan eateries, brewpubs, CrossFit and cycling fitness studios, and craft breweries, as its location is just south of Queen Street East. In fact, this renowned brunch destination's restaurants and bars are so well celebrated that they hold several food and drink events throughout the year, keeping the area bustling with happiness and activity.

Because Eastern Harbour is still in the development stages, there aren't many specifics about the future apartments in this desirable location. The good news is that there are now available condominium complexes in the area for investors to choose from. Here are a few:

Open-concept layouts and stylish loft-inspired amenities prevail in this 12-story mixed-use condo. Harris Square is located west of East Harbour and the Don River, with an exceptional location right across the street from Corktown Commons, an award-winning 18-acre park.

Wonder Condos, located at 462 Eastern Avenue, is a former manufacturing company that has been turned into a 9-story-high luxury home with high ceilings, brick details, and a rooftop terrace, right down the street from the planned transit center.

This neighbourhood around East Harbour has already seen great growth. It has experienced projects like the Canary District and Riverside Square, both of which are already sold out. Thus, it prompts investors to act quickly on the available condominiums. East Harbour appears to be a potential future development. It includes much construction preceding this fascinating transit-oriented neighborhood and job generator.

Do you want to be the first to know about the best pricing, floor plans, offers, and other news related to East Harbour condos as soon as they become available? Then contact us today and register with the Toronto Condo Team!