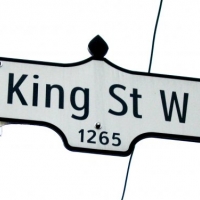 The British and French connection cannot be overlooked in this peaceful locality. Victorian buildings and cobbled pathways bring back a slice of history. King West Village once could boast the military barracks of the Town of York. This same place has the distinction as the forerunner of Toronto city and it is no surprise that the King West Village is behind the naming of New York City as well.

Do you sense the remnants of the Royal Army down the lane?  The beautiful neighborhood park was the oldest cemetery for Royal Military called Victoria Memorial Square.  The selling of military establishment took place 187 years back and the rechristening of New Town too.

Now you have access to Grandiose, Clarence Square and Victoria Square which was a pathway to a boulevard called Wellington Place, a street lined with huge old trees. The growth of this sleepy village was changed dramatically with the advent of Steam Railway lines. The old industrial buildings were converted into a residential units and are now called Loft. Strangely, Lofts are the top most portions of the room which may prefer to be called as a ‘penthouse.’

The real growth of King West Village started when the Toronto City launched the King West Village project. That brought back the past glory to a great extent; new investments, buildings, lofts and condominiums sprung up at an exponential rate. The young and urban youth especially found the new haven - ideal for a stay, entertainment, and business.  Mew and exotic eating places, pubs, and night clubs came up luring people back to the old York city. The former vitality, charm, and vibrancy are seen in this vengeance.

Welcome, King West , of Toronto's fastest growing neighborhoods where Toronto Condo Team has put their footprint firmly. We offer condominiums and lofts for high-end living. We are a reputed real estate agency house and are being highly sought after by connoisseurs.  Thanks to the substantial investments, King West Village now resembles the Soho area of New York. This rejuvenated old military area is now the ideal place for singles, couples, and families this sprawling neighborhood. The alluring area is full of entertainments and activities within proximity to Toronto's Entertainment District. May be a Time square is in the making here too! You will feel as if taken back to centuries in a time machine.

King West Village is distinct in ways that besides residential houses, condominiums, and apartments, many commercial places too have come up, making it a bit crowded. That is a kill joy factor to the otherwise serene atmosphere and chirping of the birds.

The Thompson Hotel on 550 Wellington Street West has emerged as a favorite neighborhood joint and a landmark. The architecture marvel of the city is with the spread of high-rise lofts with more than enough air and lights. Another attraction in this area is the two-storeyed loft condominium townhouses. You will also find villas and row houses to complement.

The loft buildings in the neighborhood are distinctive with cobble-stoned pathways and are characterized by their red brick exterior.  To supplement, the availability of breeze is facilitated by large French windows. There are heritage buildings as well. The loft units have concrete floors, exposed wood beams, and unplaster brick wall. The row houses on Draper Street have the unmistaken mixture of English and French accents. Some of the buildings are as old as 1880 but refurbished and kept as grandeur masterpieces.

Toronto Neighborhoods is not that far from King High Line resembling the Manhattan skyline. A busy steam loco business adorned both the locations and naming it as Georgetown Rail Corridor is simply apt. Envisage as a walking/jogging track with cycling corridor connecting historical to King Parkdale, Liberty Village, West Queen West and King West to Royal to King West Village.

Now the residents have something unique – the elevated urban greenspace.  This concept is appreciated by an array of visitors and residents alike. It would be a dream come true rivaling the competitors in the neighboring country as well. There is no fund crunch for development as more and more investors are coming forward. The momentum of development is in full swing. The new and old residents would be proud of this beautiful city of the future.

There is an eclectic mix of architecture and grandeur embracing the past and future majestically. This is the natural museum of the historical and iconic city in the context of contemporary living style.

The facade of the former Mt. Sinai Hospital on Yorkville Avenue has been preserved is a classic example of the heritage building. Also, a school building almost a century old on Hazelton Avenue, is also maintained for a new condominium development. The jailhouse once languished by the criminals is in the background of the new Liberty Village. You can smell of the distillery which was flourishing here even now.

The heritage building refurbished is not limited to residential lofts but also churches, candy factories, and toy companies. The seamless integration of old and new is appreciated by all as the unique experience may not be available elsewhere. The Heritage concept has taken by Toronto seriously with Victorian, Georgian, Colonial, Tudor, and Edwardian styles. King West Village is on top of the agenda. More conversions are on their way as vacant parking lots have all been sold for new soft lofts and older buildings no longer in use will feature new and old architecture like the new Food Hall project at Richmond and Brant St.

The King West Village neighborhood has been on top of Toronto's condominium boom that offers the best of urban living and excellent investment returns in the last 10 years.

Come and live in the royal glory at the King West Village and experience a slice of history as well!