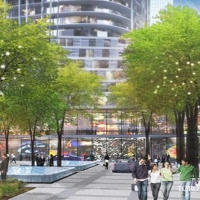 Indubitably, Toronto has witnessed massive growth and exponential development over the last two decades, with its population growing from 2 million to six and a half million. That’s a lot of people in need of housing, and the market has grown accordingly to accommodate. Neighborhoods have witnessed copious gentrification, which while helping residents, has driven the prices to sky height. If you are in the throes of renting or buying a Toronto condo, experts at Toronto Condo Team have identified the 7 hottest neighborhoods where you can get the best bang for your buck.

Yonge and Eglinton lie in the upper half of midtown. While it has always been a popular part of the city, the area has witnessed a rapid development spurt in the last couple years. The area is dotted with great restaurants, subways, grocery stores, medical offices, and even iconic bars such as Crown line and Kent and Rose. If you are someone who wants a feel of the downtown without actually being a part of it, this should be your next rental location. Its uptown location combined with the abundance of apartment buildings and condos that span its surface, make it highly affordable. It’s less than a twenty-minute ride to Dundas station.

The name may not ring a bell, but you can definitely recognize the area as Bloordale Village.  The neighborhood occupies the area west of Lansdowne, which is bordered by three different railway lines triangularly, hence the name. While the area was the hub of industries a long while back, it has undergone a massive renaissance, transforming its proud industrial core into gorgeous townhomes and lofts.  If you want to reside in the vicinity of High Park without bearing the exorbitant prices associated with High Park itself, all the while enjoying the famous and eclectic Junction Gardens shopping district, the Junction Triangle should be your first priority. With condos running out like hot cakes, we say you make a run for it.

This neighborhood is located around the Sheppard subway station. This Yonge-Sheppard neighborhood is often construed as composing entirely of suburbia, but that is far from the truth. It is second only to Toronto’s downtown core when it comes to the sprawling commercial and condo development, which is why it is often dubbed as “the second downtown”. If you are someone who seeks a downtown lifestyle without living in the downtown core itself, this neighborhood is perfect for you. Not to mention, its competitive prices make it a better option than the downtown core as well. In addition, the neighbor is only a 25-minute subway ride to the heart of downtown and is TTC-accessible. You can’t possibly live in a better up and coming neighborhood in Toronto than this.

While we admit that Yorkville is indeed considered one of the high fashion bougie areas of Toronto, falling on the priciest end of the spectrum, it has a lot of value to offer for those who can afford it. Lying in the heart of midtown, in the vicinity of other fun neighborhoods, such as Yonge and Eglinton and Church and Wellesley, and its close proximity to the Bloor and Bay station, make it highly coveted. No need to go traversing around the city looking for high-end dining options as well when you have got them right at home.

As you can guess from the name, the Harbourfront lies on Lake Ontario. Boasting picturesque pedestrian walkways and a breathtaking view, it is the ultimate location for a summer house. Not to mention, it is in close proximity to the GO bus station, VIA rail station, and the Union station. Whenever travel lust calls, you have Billy Bishop Airport within driving distance as well.

If you are overlooking this great neighborhood just because it is “student heavy”, let us change your mind. Imagine being transported back to your crazy college days with bars with great drink, cheap food options, living the downtown life, and lots of dance clubs. The neighborhood boasts rows and rows of gorgeous houses, most of them being sororities and frats from UFT nearby. If you couldn’t live the Greek life back in university, life is giving you another chance.

This beautiful neighborhood is that last stop on the main yellow subway lane. The neighborhood has witnessed a rapid condo development recently, and its location has made it a hot spot for buyers. You will especially want to live here if you love Persian and Korean food. The area is dotted with so many restaurants and bars and you will never be pressed for choices to have fun. Competitive prices, cheap rents, and plenty of condo buildings have all added to the popularity of the area and many businesses are moving there already. If you willing to live just a tad far from the heart of the city in lieu of super-cheap rent, this is your place to be.