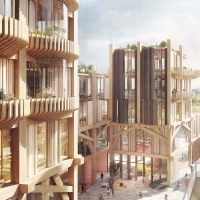 10 Architecture Projects That Are Going To Enhance Toronto’s Landscape 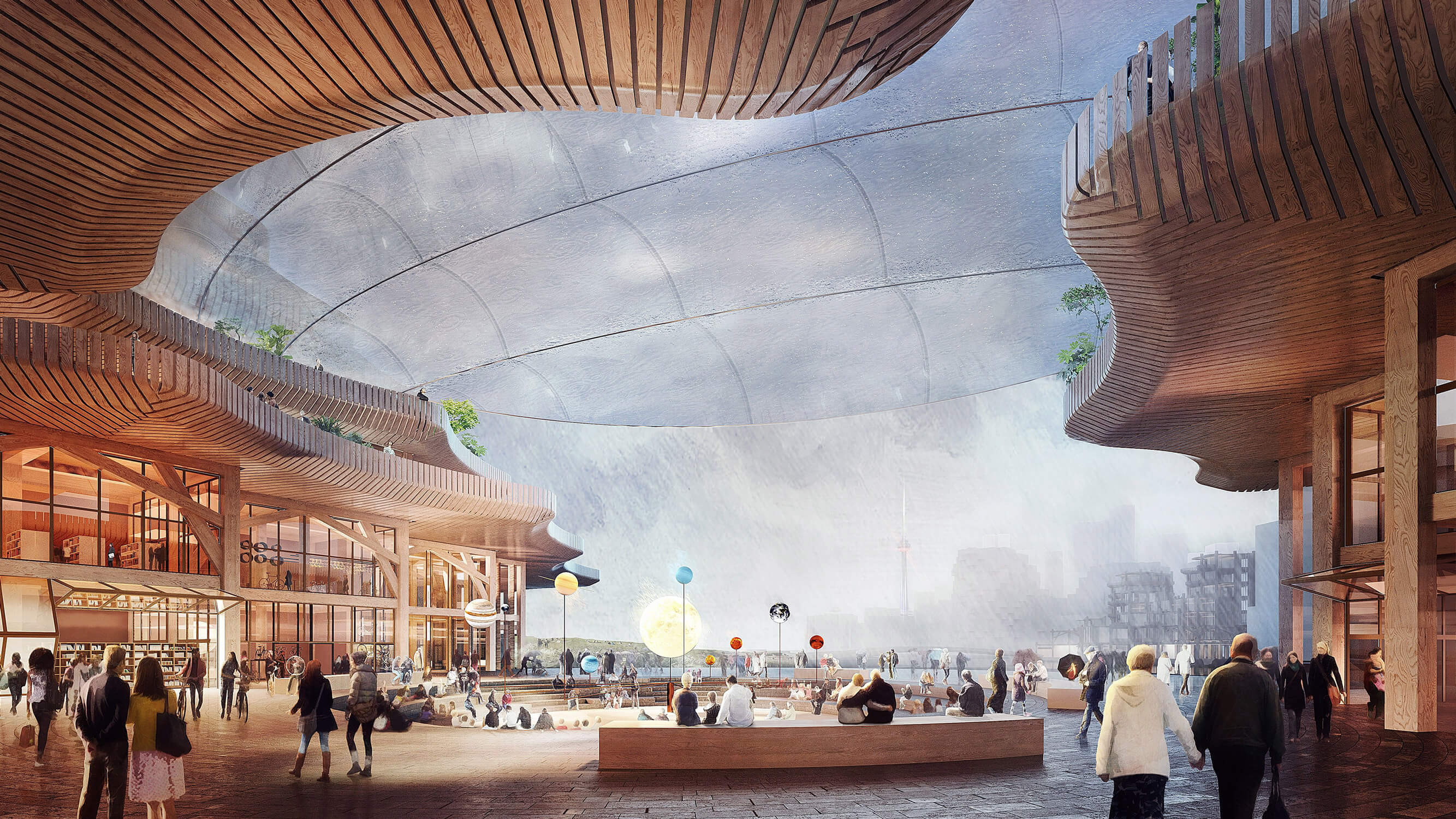 Plenty of stunning projects are coming in the city of Toronto that will soon be enhancing the real estate market of the region. A lot of international architects and firms are bringing in their experience in some of the most anticipated constructions. Right from the stacked renderings of U of T's School of Cities by Diller Scofidio to the Sidewalk Toronto’s proposals by Thomas Heatherwick, there are some amazing projects upcoming in Toronto.

These projects won't just provide better housing options to the buyers, but there are commercial, retail, and various other constructions too. The real estate landscape of Toronto is soon going to reach the next level.

Here are the top 10 architectural marvels that will completely modify the face of Toronto.

1. 90 Queen's Park for the University of Toronto by Diller Scofidio + Renfro

Already getting a lot of attention, this new project by Diller Scofidio + Renfro features a stunning shimmering building. The building is located at 90 Queen's Park, where is McLaughlin Planetarium is. This stunning marvel will be the home to the University of Toronto's new School of Cities. There will be various departments, including the law to Islamic studies. Moreover, there will be a connection to the historic neighborhoods as well. So, people will be able to access Falconer Hall, Royal Ontario Museum, and Flavelle House with ease.

Diller Scofidio + Renfro is the same company that has transformed quite a few buildings in New York. They have planned some of the best designs and architecture for residential and commercial properties.

This will be a nine storey high building which will have a textured massing from the southern façade carves. In fact, the cladding materials choosing for this project will enhance the effect. On the other hand, the northern façade of this building will have a metal panel and fritted vision glass, which will provide the perfect blend. There are low reflective glass and aluminum on the eroded side of the project. Diller Scofidio + Renfro is in collaboration with ERA Architects and architectsAlliance. There will also be a stair link and a central atrium on the inside. This will link to the lounge, meeting, and study spaces in the building.

If given the green light, Sidewalk Toronto will certainly make this one of the best neighborhoods of Toronto. The stunning proposals by Snøhetta and Thomas Heatherwick make this development one of the most polarizing ones in Toronto. The duo has provided plans for some amazing buildings. These include a couple of high rise towers by Snøhetta and the future HQ of Google in Toronto.

As per the proposals, the buildings will have fan-like balconies along with balletic structural beams. Sidewalk Toronto will have two scale prototypes of the concepts that were initially proposed in 2018. The interactive road scape by Carlo Ratti along with building raincoats by RWDI and Partisans will be revealed soon.

One of the top architectural marvels is located near Toronto, and it has a lot of people excited about the plans. Along with Kearns Mancini Architects, Heneghan Peng Architects have provided plans for a 7,500 square meter building, which is along a canal. This masterpiece by the architects from Dublin will have a landscape hugging building in Peterborough.

Once the building is completed, it will replace the current museum, which has the largest collection in the world. Also, the canoe and kayaks belonging to this museum are currently in a warehouse-like building, and this will be a huge enhancement.

Aside from the stunning appearance of the building, there will also be a green roof, which is almost a hectare in size. This will overlook the canal, which connects to Lake Ontario. Canadian Canoe Museum by Heneghan Peng is surely going to enhance the architectural standards around the location.

4. Innovation Centre for the University of Toronto by Weiss Manfredi and Teeple 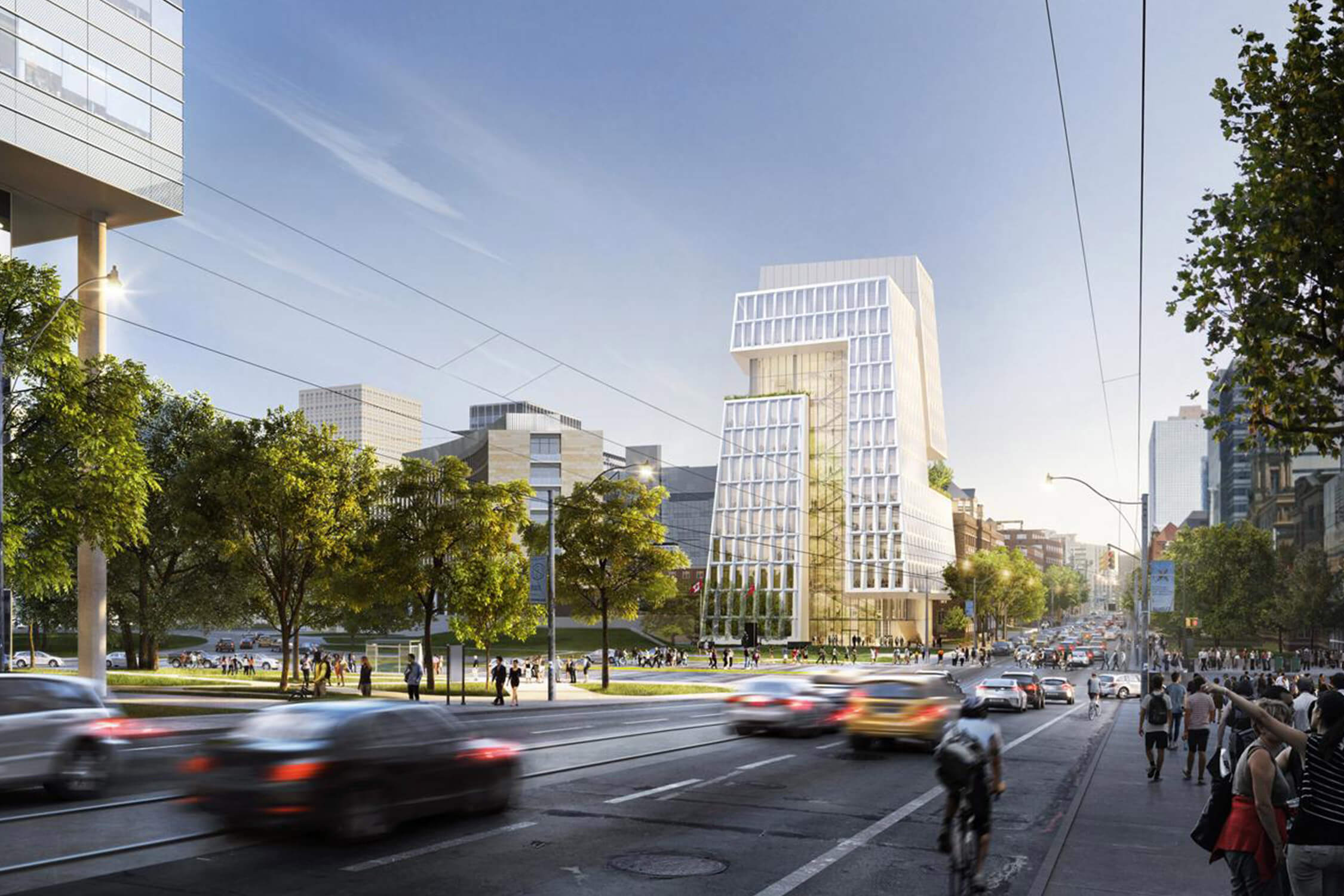 Another architectural marvel in the U of T is the 14 storey high building by Weiss Manfredi and Teeple. The innovation center will cover an area of 23,225 square meters. The building will have the Innovations and Partnerships Office, U of T Entrepreneurship, and the Vector Institute, which is a renowned institution in AI Technology.

The building will replace the western portion of the Banting and Best complex, and it is at University Avenue and College Street. The Innovation Centre will be right opposite the MaRS Discovery District and the group of innovative companies. This stunning development is expected to be completed in 2021 by Teeple Architects and Weiss Manfredi, who is based out of New York. There will be a number of renowned corporates and startups in the Innovation Centre.

5. One Delisle Tower at Yonge and St. Clair by Jeanne Gang

Jeanne Gang presented this proposal for this stunning tower, which is being planned in by Studio Gang in collaboration with WZMH for Slate Developments. This stunning high rise building will have 48 storeys, and it will feature top designs and architecture. There will also be a gleaming-white and multi-faceted tower which will have a cylindrical shape.

One Delisle Tower is at the junction of St Clair and Yonge, and it will soon be a landmark development in the neighborhood. Jeanne Gang mentioned that by knitting the podium of the tower into the historic facades on the street, the height of the development would be irrelevant. This stunning character to One Delisle Tower is what sets it apart.

Located in the Fashion District, this stunning hospitality project is grabbing a lot of attention due to its modern design. 51 Camden is a textured development compared to various other projects. The 13 storey high building will have weathering steel and 130 unit brick. Moreover, it is in planning by Shim Sutcliffe that is a popular company in Toronto. The firm puts in a lot of effort into the design and craft for every property.

The swooped entrance of the building is like a veil that is lifted when the visitors come in. There are massive exposed concrete columns as well, which makes this development unique. Some of the other projects by Shim Sutcliffe are Wong Dai Sin Temple, Integral House, and the Sisters of Saint Joseph Residences. Moreover, all of these projects showcase the modern and unique ideology of the architects. In the form of 51 Camden, Shim Sutcliffe is bringing a stunning marvel to Toronto.

There were several entries and ideas put forth when multiple international and local architectural firms were requested to propose designs for the waterfront parks of Toronto. One of them that stood out from the rest was Claude Cormier’s Love Park. It was stated as a “green space with a pinch of whimsy. ”Cormier is the designer responsible for the dog and cat-themed parks in Toronto and also the 18 Shades of Gay in Montreal. The proposed plans feature a characterized Love Park, which has promenades and trees in a zigzag manner. There will also be a reflecting pool in a heart shape, and this will spread across an area of 40 by 50 meters.

Teeple and Morphosis teamed up for the plans of the Graduate House at the University of Toronto back in 2000. The two experienced architectural firms have teamed up again, this time to provide a stunning plan for OCAD University. There will also be contributions from Two Row Architect. The company will be leading the creation of an Indigenous Visual Culture and Student Centre. This is a major part of the development.

This stunning and attention-grabbing project is about repurposing and renovating of OCAD University's properties along with McCaul Street. In fact, there will be new constructions s well, which will spread across a total area of 5,110 square meters.

9. Development at Church + Wellesley by 3XN

In the coming years, another stunning development is going to enhance an intersection in Toronto. A rental tower which is at the corner of Wellesley and Church street is a major part of the LGBTQ community. There will be apartments which are in the designing stage by 3XN.

3XN is one of the world's most sustainably-minded and innovative firms. Also, this experienced company based out of Denmark is designing a couple of amazing projects in Toronto, including The Waves at Bayside. The initial plans by 3XN have stunned everyone, and it is already grabbing a lot of attention.

The development at the corner of Church and Wellesley is going to be a high rise tower of 43 storeys there will be a dual-level plaza that will feature retractable glazed walls. The main purpose of the plaza is annual and community events, including the Pride Parade. After the initial two levels, there will be four metal-clad segments. In fact, these apartment units will be stepped away from the sidewalk, and they will be staggered by terraces.

Renzo Piano is one of the most respected architects in the world. They have provided stunning plans for the development of a new Toronto courthouse. Also, this modern development at 10 Armoury Street is in planning in collaboration with NORR Architects and Engineers.

The design of the building will have embossed metallic back pans along with layers of glass. This will be the composition of the façade, and the building will also be elevated. Aside from this, the Toronto Courthouse will have a public plaza on the ground floor along with an atrium, which will be 20 meters high. Toronto's Courthouse will have a modern and open look, which will soon be a symbol of the city.

All of these stunning developments and plans by local and international architects will change the real estate landscape of the city. Toronto is ready to witness the best architectural marvels, and there is certainly a lot to look up to.